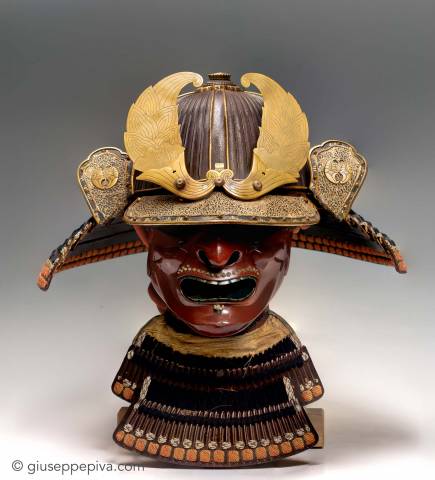 The helmets of a Japanese suit of armor were made in many styles, shapes, and with different features. However, there are five elements that we can almost always find throughout the centuries of Japan's history. They certainly had many variations but were never abandoned.

The shapes of samurai helmets

The helmet of samurai armour - the kabuto - can have different shapes. These may be determined by the period in which they were created, and thus by the combat style of the samurai, but they may also be influenced by the place in which they were invented, or by the school of armourers who produced them.

In the Middle Ages, kabuto were essentially hemispherical, with massive rivets (hoshi) and large side turnbacks (fukigaeshi) to protect the face from opposing samurai's arrows.

Later, during the Kamakura period, a new style emerged from the Nara area, which was home to the Haruta and Iwai schools. It was named akoda-nari kabuto because of its profile, which resembled that of a squash.

With the introduction of new fighting techniques and guns, new construction techniques for samurai helmets emerged in eastern Japan. The suji-bachi kabuto and ko-boshi kabuto appeared, helmets with a lamellar structure that may be hemispherical, like those manufactured by Nobuie, or have a contoured profile. Three fundamental varieties of kabuto shapes can be distinguished based on the line of the kabuto profile:

The zunari kabuto, so named because its smooth surface resembles the shape of a bald head, and the momonari kabuto, whose profile resembles a peach, are two more helmet types from this time period.

During the Momoyama period, unusual kabuto designs were also produced in order to distinguish the armour of the samurai who wore them. As a result, the term "kawari kabuto" refers to all helmets with a "unusual" shape.

For more information about kabuto shapes visit this page.

5 Tips on Buying your first kabuto

A samurai helmet is known as a kabuto. Its essential component is an iron bowl known as a hachi or bachi, which is t he most significant component of the helmet, protecting the samurai's head. A kabuto with a strong and resistant bachi is usually included in an original antique samurai suit of armor. A bachi is then equipped with a neck protection known as shikoro, as well as a decoration for the hole on top (hachimanza) and a design on the front known as maedate.

When judging a kabuto, keep in mind that the bachi is the most important thing to look at; don't get distracted too much by fittings and decorations!  Of course, they are valuable, but what you are actually purchasing is the iron bowl. Japanese important armor makers were actually creating this part only, while other fittings were often added by other craftsmen.

You can read more about maedate and other decorations in this article. 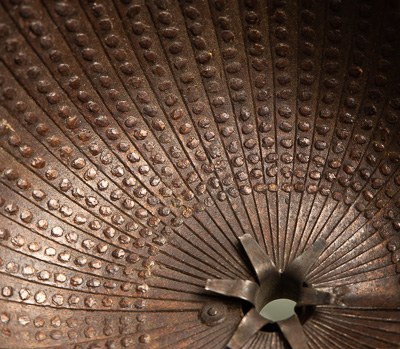 If the bowl is not fitted with a cloth linen (called ukebari), you can look inside the kabuto and see how it was constructed. Looking at how the plates have been cut and assembled can reveal a lot about the age and quality of a Japanese helmet. This is also where the armor craftsmen inscribed their signatures and dates.

3. Familiarise yourself with patina

A kabuto is never left uncoated because iron oxidizes quickly. There are numerous surface treatments, but all of them alter over time, resulting in some sort of patina. Patina is a major indicator of iron's antiquity and authenticity. As kabuto are exposed to various environments, the iron is impacted, resulting in patina and a change in the texture and color of the surface of the helmet.

Kabuto can be built in a variety of methods, some simpler with fewer plates and work, and some more elaborate and difficult to manufacture. The most extravagant kabuto (kawari kabuto), of which there are many for sale, are not always the most difficult to create. You should be familiar with the following kabuto models: zunari kabuto, momonari kabuto, suji-bachi kabuto, and ko-boshi kabuto. You should be aware, for example, that building a 120-plate kabuto is far more difficult, and thus far more valuable, than building a momonari helmet. Understanding the quality and construction qualities of each type will assist you in determining age and value.

5. Look at as many examples as possible

Museums are excellent places to train your eye and learn about different stylistic traditions. Visitors to dealers' galleries and exhibitions always have the bonus of being able to handle items and ask experts questions. If you are unable to visit a museum or a dealer's show, websites like giuseppepiva.com allow you to zoom in on the delicate features of Japanese armors. Purchase some reference books as well. Many exhibition catalogues will show you the greatest quality samurai's kabuto so you can train your eyes.

Some museums have excellent databases with high resolution images of kabuto. Check the Met website and see their pasterpieces. 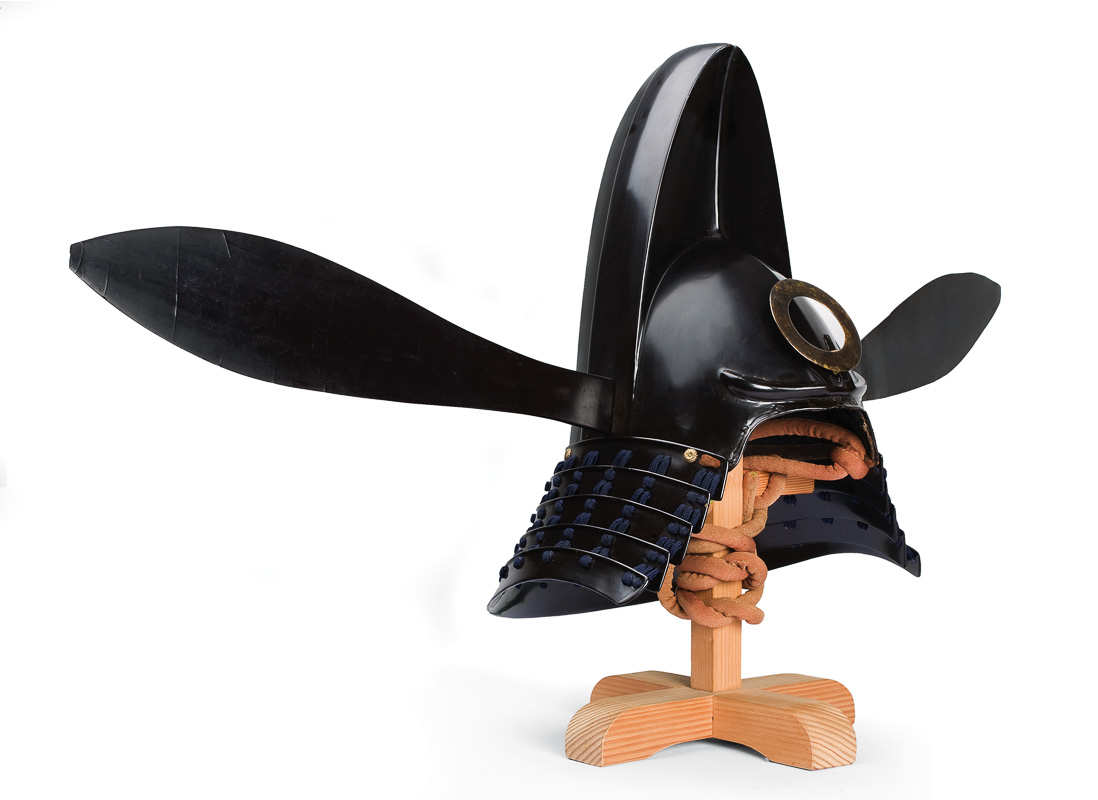 Most collectors of original Japanese samurai armor do not have the space to purchase several sets, so they focus on minor parts such as kabuto (Japanese helmet) and menpo (samurai mask). The main reason for this selection is that these two pieces were produced by the most famous Japanese armorers as they were the most difficult to make. Furthermore, they look great on their own, whereas other portions, such as kote or suneate, can be more difficult to appreciate.

Many factors should be considered when purchasing a Japanese kabuto. The most significant factor is the quality of execution. Many collectors begin by purchasing kawari kabuto (extraordinary Japanese helmets) since they have a powerful impact and are highly pleasant, whereas typical kabuto such as ko-boshi kabuto, akoda-nari kabuto, and suji-bachi kabuto may appear all similar. However, as your understanding grows, you may begin to realize the effort in making such kabuto, as well as the incredibly high quality of some of these Japanese armor's elements.

The price range in which you wish to invest is, of course, critical. My recommendation is to aim to get the best value for your money. If you have a limited budget, you can surely get a fine, simple kabuto, but don't expect to buy anything unusual or flamboyant: if you come across such a deal, keep in mind that the item may not be what you expected.

Last but not least, if you are unsure, put your trust in someone else. He could be a dealer, a buddy collector, or a museum curator. This area is fraught with risks, and you don't want to buy something you'll be sorry for: recent imitations, bogus signatures (gimei), adjustments that make a kabuto appear better, and so on. Please keep in mind that auctions can be quite tough to manage, since they frequently have to publish what they agreed with the seller on the catalog. You have been warned!

Title h1:
How to buy a samurai helmet – Kabuto? Kabuto buying guide from an antique collector perspective
back