Images of the Buddha, who lived in India between the 6th and 5th centuries B.C., originated in North India and present-day Pakistan and Afghanistan in the 1st century A.D. Over the following centuries, sculptural representation of Buddha and the large pantheon of Buddhist deities became an important artistic tradition in nearly every culture between Afghanistan and Japan, where this religion arrived during the Nara period, mid 6th century.

Japanese buddhist sculptures range from miniature figures to giant images and are almost invariably  made of wood.

Here some pieces of advice for those who would like to approach this particular field of Japanese art. 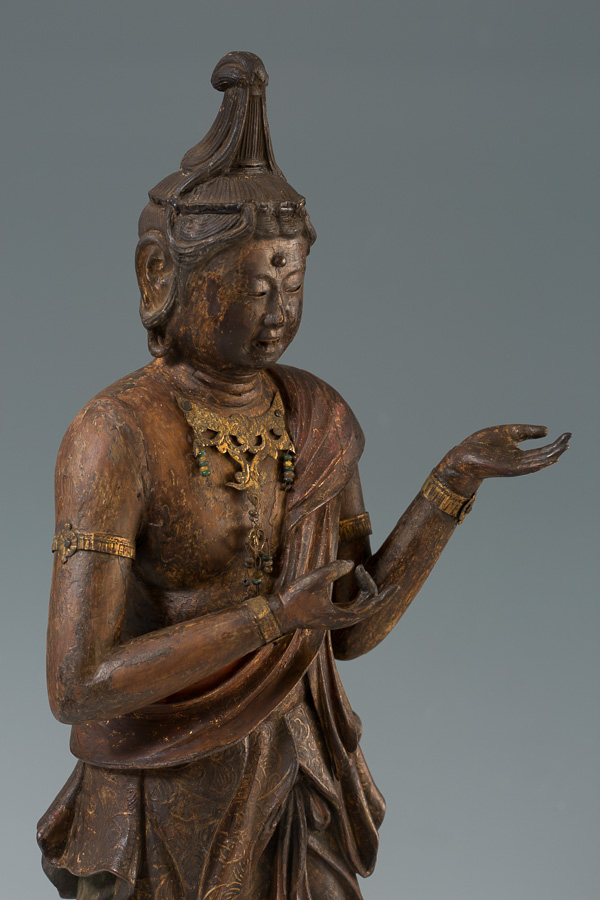 Buddhist images are all very similar, but their age can really change their value. Oldest figures from the Heian period are extremely rare and often in poor condition. The Kamakura period (1185-1333) is perhaps the most interesting, as terrific artists, like Unkei and Kaikei, produced naturalistic images of deities and monks. During the Muromachi period, Zen Buddhism rose to prominence and buddhist art focused more on painting rather than sculpture. Replicas of the older models were made until the Edo Period and the age can often been told by the facial expression of the figure, if not from the materials.

As often happens in art, the market for Buddhist sculptures can fluctuate, with different periods or styles rising and falling in popularity. An exemplary piece from any time period, however, will hold its value.

What makes for great quality in a Buddhist sculpture is based on a number of things, including the stylistic modelling of the figure and the skill of the artist. When considering your price point, always buy the highest quality work you can afford, choosing quality instead of quantity.

As a universal rule, you should never buy a thre dimensional sculpture unless you have seen it in person. A terrible work can look really great in a photograph and the converse is true as well. Handling the physical work allows you to study all of its components and to judge condition and restorations. As you start building up your visual memory, you will be able to spot little things that are evidence of something not being quite right with a work.

As with any other area of collecting art, condition is an important aspect in the value of a work. Given the age of many Buddhist sculptures and the fragility of wood, however, one must be realistic, and chances are that many examples will have undergone some form of restoration. Understanding how extensive a restoration is, is vital to understand the real value of a Japanese Buddhist sculpture.