Arts and culture flourished in unprecedented ways during Japan’s Edo period (1615-1868). During this long era of relative peace and stability, innovative painting styles were developed and refined alongside traditional painting schools and practices.

Artists selected their subjects from a long-established body of legend, folklore and popular religion, often with Chinese antecedents.

Among Edo Period painting schools, including those that were already active before, the most well known are probably the following:

The Kano school was the longest lived and most influential school of painting in Japanese history; its more than 300-year prominence is unique in world art history.

The school began by reflecting a renewed influence from Chinese painting, but developed a brightly coloured and firmly outlined style for large panels decorating the castles of the nobility which reflected distinctively Japanese traditions.

The boldness of the brushwork is especially characteristic, and the sharpness of outline differed noticeably from that of the Chinese Song models. Surface values and flat decorative treatment were emphasized on screens and sliding panels.

The Tosa school was founded in the early Muromachi period (14th–15th centuries) and was devoted to yamato-e, paintings specializing in subject matter and techniques derived from ancient Japanese art, as opposed to schools influenced by Chinese art, such as the Kanō school.

Reviving interest in Japanese history in the 18th and 19th centuries kept demand for Tosa style work alive, and the style of the school, with its thin line and reliance on detail, was influential on the ukiyo-e school of paintings and prints.

The Rinpa school was represented by artists such as Tawaraya Sotatsu, Ogata Korin and Kenzan, Sakai Hoitsu and Suzuki Kiitsu during the Edo period. Yet "Rinpa" is somewhat of a misnomer in that the style was not passed on through an organization or through teacher-student relationships. It comprised independent artists, each of whom admired the work of his predecessors and reverently followed their styles, eventually developing the school as a whole. The fact that there is a 100-year disparity between Sotatsu and Korin attests to this unique form of development.

A highly innovative and phenomenally successful school of painting, this school originated with Maruyama Ōkyo (1733–1795) and his foremost pupil, Matsumura Goshun (1752–1811), working in the Shijō or “Fourth Avenue” district of the capital city, Kyoto.

Maruyama Okyo was trained in the conservative, almost three-century-old Kano school patronized by the shogunate and daimyo class. He initially favored strong, stylized strokes of ink. Later, under Western influence, he developed a more realistic approach by working from carefully observed preliminary sketches that employed both outlining brushstrokes and wash.

This school flourished in the late Edo period among artists who considered themselves literati, or intellectuals. While each of these artists was, almost by definition, unique and independent, they all shared an admiration for traditional Chinese culture. Their paintings, usually in monochrome black ink and nearly always depicting Chinese landscapes or similar subjects, were patterned after Chinese literati painting. 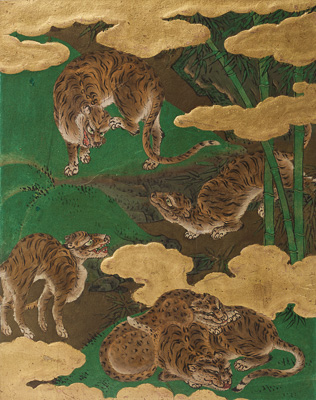 The term Zenga describes zen painting and calligraphy from the early Edo period to the present day. Artsits were mostly zen monks and their work expressed their feelings about life and spirtituality.


Ukiyo-e, often translated as "pictures of the floating world," refers to Japanese paintings and woodblock prints that originally depicted the cities' pleasure districts during the Edo Period.

These idyllic narratives not only document the leisure activities and climate of the era, they also depict the decidedly Japanese aesthetics of beauty, poetry, nature, spirituality, love, and sex.

While woodblock prints include a variety of  subjets, from landscape to sumo wrestlers, painters focused mainly on female beauties.

In the world of art, each school had a different patronage: Kano painting were ordered by the samurai class; Tosa painting by courtiers; Rimpa and Maruyama-Shijo painting by merchants; Nanga (literati) painting by educated Confucians; traditional Buddhist painting by non-Zen temple monks; and ukiyo-e painting by townsmen.