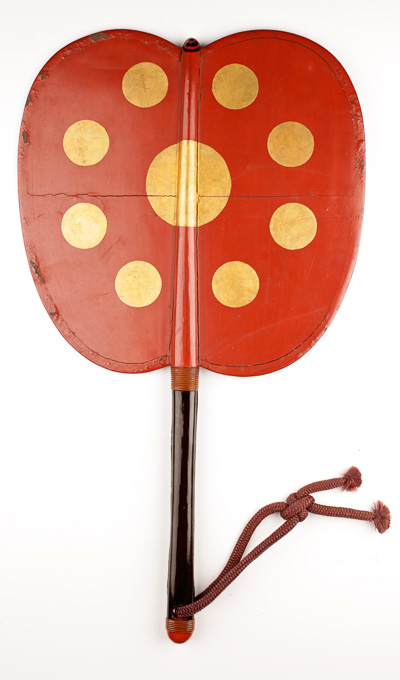 The various implements used by samurai commanders to signal orders on the battlefield or to direct troop movements were referred to as jineigu. Among them, the gunbai uchiwa, a fixed fan, was the equipment that was used by generals and daimyō and hence became a symbol of power. Oldest gunbai are rather simple, while during the Edo period they were often decorated in golden lacquer and became true jewels.

A similar tool, originally used by samurai to control the troops, is the saihai, a sceptre with hanging paper strips or fur, inspired by the design of buddhist monks' staff.
The saihai's final can be in different materials; sometimes is applied directly to the stick while some other time it hangs to a small rope.
A different kind of accessories is the gunsen, the typical Japanese fan. Folding military fans were used by samurai while camp during wartime. They usually have eight or sixteen tines, with a broader tine on either end. While their original function was straightforward - to cool the user in hot weather - folding fans were used for military purposes beginning in ancient times. During the Muromachi period (1392-1573), with the increasing organization of military rituals, folding fans become essential to various ceremonies. The gunsen served  as a handheld tray for the presentation of gifts; a samurai might wave his fan to pacify evil spirits on the way to or form the battle-front; and the fan featured in a general’s inspection of the decapitated head of an enemy. Such an inspection might be carried out as follows. First the general would sit on a folding stool (shōgi) a gunsen in his right hand. An officer would hand a bow to the general, who would tuck his fan into his belt; take the bow on his left hand; stand it on end; and use it to stand up. He would conduct the actual inspection of the served head standing at some distance from the stool. After the inspection , he would return to his seat, sit down return the bow to the officer, and then open the fan completely and fan vigorously three times with his left hand. Finally he would close the fan and return it to his right hand, thus concluding the decapitation inspection ceremony. Gunsens were generally decorated with a design of sun and moon.
A variation of gunsen was made with an iron structure. These weapons, called tessen, literally meaning "iron fan," were constructed of either an actual folding fan with metal ribs or a non-folding solid bar of either iron or wood and shaped like a folded fan. During the Edo Period, the tessen was often considered a common self-defense weapon for extraordinary situations. There were many situations in which a samurai would not have access to his sword. For example, if visiting another person's home, especially one belonging to a superior, a warrior was generally required to leave one or both swords with an attendant at the door. To prevent violence, obvious weapons such as swords, daggers, and spears were also strictly prohibited within the small confines of the pleasure districts such as Yoshiwara in Edo. A tessen, though, was acceptable in any situation, thus leaving the samurai always armed with at least one very effective defensive weapon.
back