Menpo. An armor for the face? 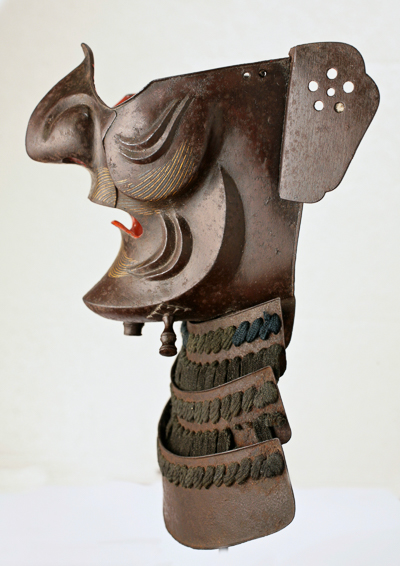 Menpō is a general term to indicate a protection for the face in a Japanese samurai armor. It is generally made of iron but leather ones (nerikawa) are not rare.

There are mainly three types of menpō: one that would cover only the chin (hanbo or hoate, deriving from the medieval happuri), one that would cover the lower part of the face (me-no-shita-men, literally "under the eyes") and sōmen, which would cover the whole face. We can then classify those mask depending on their facial expressions, most of which derive from the theatre masks. Without going into all categories, we see mainly two models: ressei men, a fierce expression with mustaches, teeth on view and wrinkles all over, and ryubu men, with a "noble" and quiet expression.

The big question is: were they ever used in battle?

The first type - those which cover just the chin - certainly were. They also served to fix safely the helmet (kabuto) and to hold the throat protection (yodarekake or tare). How about the other ones? Sōmen are not very practical, so we can exclude them, also because all known full-face masks are from the Edo period. But we do know half-face menpos from the Momoyama period and most of the famous generals' armors include a menpō. Were they using it on the battlefield? I don't think so. Let's analyze few points:

1. Menpo are too large to be comfortably worn. They display well on an armor but they don't fit any normal face; they can be twice as a regular face's width.

2. There is no painted source showing a samurai wearing a menpo in battle, if not a hanbo; we find paintings showing me-no-shita-men during parades, mounted with a kabuto on a pole, but never on a human being. Besides, on all known generals' portraits, we can see them wearing an armor complete with kabuto, but never a mask that covers their face.

3. Apart from generals' suits of armor, we don't find soldiers' suits with this kind of masks from the battle period (sengoku jidai). It was already a custom to mount an armor for show and menpos were probably used only in this case.