Nihonto -The types of Japanese Swords 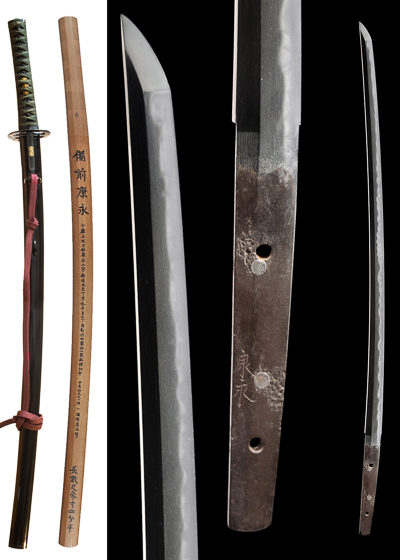 The Japanese sword is probably the most perfect cold weapon ever produced by mankind. With few exceptions, it is curved and single-edged. Japanese sword was perfected during the Heian Period (794-1185) and continued to be the indispensable weapon of samurai, the “warrior class” of feudal Japan - and symbol of their spirit - until the end of the nineteenth century.

The process of Japanese sword manufacture originated in Chinese steel technology, which was introduced into Japan by the fifth century AD. As well as begin a deadly weapon and unique work of art, the Japanese sword (nihonto or katana) is imbued with a spiritual essence. With the jewel and the mirror, the sword is one of the three holy objects of the ancient Japanese imperial regalia and it is also therefore considerate an implement of Buddhism emblems carved on the blade. In traditional Japanese culture, every workplace has a shrine dedicated to the deity of that particular profession, and Japanese sword is no exception.

The concept of cleanliness is applied to man as well as material and the smith will bathe and purify his thoughts in preparation for the job.  Each process is governed by the practices of Shinto, the native religion in which the deities of nature commune with men in his professions and other daily activities.

The difference in length, shape and metallurgical characteristics of the Japanese sword that occurred over the centuries make it possible to tell a Japanese sword’s age and region of origin.

Structure of the blade

During the manufacturing process of a Japanese sword, steels of different quality are combined in a number of ways to produce a blade with a hard skin and a relatively soft core. The steels are first treated to obtain the required purity and carbon content and then made into a block that is repeatedly heated and folded to produce a laminate structure. After several or as many as twenty folds the block is beaten out into the final shape of the Japanese sword. The Japanese sword is then further shaped with scrapers and files, and prepared for the heat treatment.

The grain on the Japanese sword (jihada) results from the folding process during the early stages of manufacture, after which hammering and filing form the final shape.

The most important part of the process then takes place: the heating and quenching of the blade to harden the Japanese sword. The blade is first coated with a thick slurry of clay, charcoal and the fine mixture of steel and stone dust obtained as a by-product of the polishing process. This is partially scraped off along the cutting edge, and when it has dried hard, the blade is heated until it is red hot and quenched by plunging it into a bath of cold water. The effect of the different thicknesses of clay is to vary the rate of cooling and consequently the degree of growth of the various crystalline structures formed in the steel. The most extreme conditions in the metallurgic transformation of the steel occur along the junction of the thicker layer of the clay mixture with the thinner band along the edge. This forms the hamon (badge of the blade), where most prominent crystal structures are seen. This is visible as a whitish continuous line from a few millimeters to about a centimeter in from the cutting edge. At the same time, the slower rate of cooling under the thicker layer of clay produces further structures on the hira (flat) of the blade, whereby the jihada (ground skin) is produced. The hamon is the hardest steel part of the blade of the Japanese sword, which can then be razor-sharpened.

The mechanical properties of the Japanese sword, and hence the beauty, depend upon the skill with which the quenching process is done.

By convention, Japanese swords are divided into four types accordingly to their length, but nomenclature has changed over the centuries and one should also remember that “katana” is the general term for Japanese “sword”.

Focusing on style and age, the Japanese sword can be classified in:

After Edo period the production of Japanese sword continued again as an artistic artifact rather than a weapon. We then refer to these as Gendaito (modern sword), Shinshakuto (newly made sword), etc.