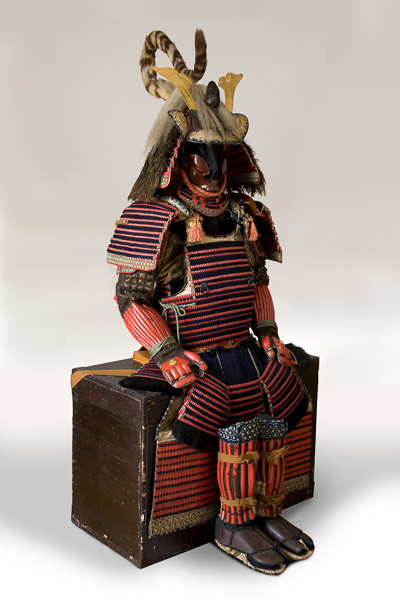 In old Japan, the life of a daimyō was spent divided between administrating their land and the residency in the capital. After Japan was unified in 1600 under control of the Tokugawa family, the capital was moved from Kyoto to Edo (now Tokyo) and important samurai families had to obey the “alternate service” institution (sankin kotai). By these laws, every daimyō had to stay every other year in Edo and his family would have to live in the capital as hostages while he was resident in his land. Furthermore, when a samurai family was entering or exiting Edo, he was required to organize lavish processions, known as daimyō gyoretsu, wearing rich armor and expensive clothes and accessories. Buying such high level samurai arms and armor would have weakened the clan’s finances, This system, originally initiated in the Muromachi period, reinforced the power of the shogunate, crushing any ideas of autonomy among former warlords.

Due to this new samurai’s lifestyle, during the Edo period (1615-19867) armorers changed their approach to armor’s construction and the aesthetic aspect became more important than its protective capacity. A suit of armor would have certainly remained heavy and efficient, but the attention of the maker would go on its decoration rather than its usefulness on the battlefield.

While there is a general revival to the medieval armor with applied printed leather decoration and metal kanamono all over, several innovations are typical of the Edo period, including embossed decorations (uchidashi), multiple plates kabuto (up to 120), rich menpo (samurai armor’s mask) and fine applied iron ornaments.

The institution of sankin kotai permitted than that the manufacture of samurai armor remained alive until the Meiji period, during the second half of 19th century, when feudality was abolished and a regular and modern army was created.