The most personal part of the Samurai armor: samurai face Mask 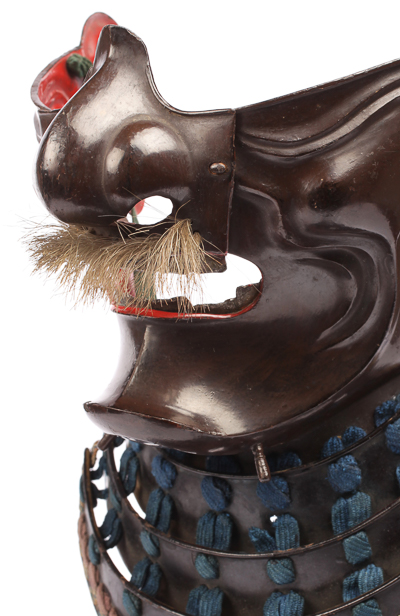 By the 14th century, samurai face mask were added to the Samurai armors to serve as a protection for the head and the face from cuttings.

There are 4 types of mask designs that came into general use in Japan: happuri (which covers the forehead and cheeks), hanbō (covers the lower face, from below the nose all the way to the chin), sōmen (covers the entire face) and the menpō (covers the face from nose to chin).

These types of samurai masks were used under the helmet (kabuto) and became an enduring symbol of the samurai’s power and rank. The facial armor can be made from iron, leather, or a combination of both. Most of the masks had a little opening at the bottom for the sweat to run through. They achieved such purpose of perfection that only a little more advancement was necessary. During the 14th-16th century, the only major addition was the chest and throat protector, called a nodowa that was added at the tare, a plates protection hung from the menpo.

These incredible masks featured exaggerated snarls, grimaces and even fierce fangs or teeth, detachable noses, and the famous bristled mustache, often made from horse tail hair. The designs of the mask are meant to make the wearer appear scarier and match to the samurai’s armor. Their shapes and types derived from the theatre masks of that period.