It is a common idea that traditionally japanese samurai sword was the main weapon for a samurai during battle. This is actually not true, as it was used only as a last resort or in a duel (especially during the Edo period), while there were many others weapons that could be used in a battle and pierce a samurai armor. 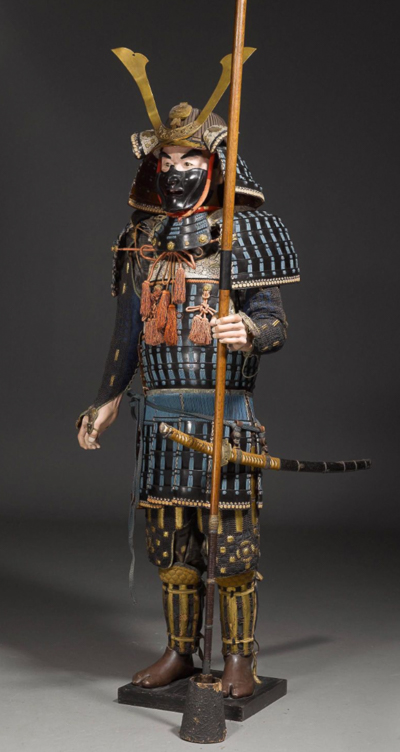 - The bow and arrows had very ancient origins, and its use was considered a noble art (kyujutsu) involving a complex set of rules that were part of the training and education of the a samurai.

- The double edged spear (yari) had blades forged according to the same techniques as used with swords, hence it was a deadly weapon. There were various martial art schools that taught the use of the spear in combat.  It was the weapon used by the ashigaru, that is the infantrymen in feudal Japan, and later the guards of the shōgun.

- The naginata may be compared with the European falchion or halberdier.  In effect, it was a long, curved blade broadening at the end and mounted on a shaft. The naginata was a weapon for individual combat in battle but was used also in the defence of private homes and buildings, and its use spread among women as well.

- The sword was the quintessential weapon of the samurai.  It was considered a kami, as it was considered the soul of the samurai. Its form has undergone various changes in the course of time. The smith heated and hammered, flattened and folded the metal up to fifteen times, conferring on the blade over thirty thousand inner layers, and making it extremely hard and purified of the carbon content. This method of forging samurai swords ensured unparalleled strength and sharpness.
There are various kinds of Japanese sword.  The tachi was used single-handed while riding and was then longer and more curved than the katana. The lenght was decided depending on how the weapon was carried: when strapped to the belt (obi) with the cutting edge facing downward, it was mounted as a tachi; when worn inside it, with the edge up it is generally a uchigatana.
The katana was the sword of the samurai, companion to the shorter sword wakizashi; the set of these two weapons were known as the daishō and they were both carried in the obi (edge up).  Only the samurai could carry a long sword, while other people could wear only a wakizashi or a tanto. The tanto is a shorter blade and could replace a wakizashi in a  daishō.

Firearms were introduced during the Momoyama period and played an important role for the unification of Japan. It is worth noting that even if Tokugawa Ieyasu, Japan’s peacemaker, won at Sekigahara thanks to the firearms, he feared their power;  in 1607, he established that special licenses were required for their production. It is thought that by 1650 there were a few thousand of such permits in use (in a samurai class of some two million).  After 1668, the production of firearms fell off drastically and in 1700 the weapons were quite rare.