Study: fixing maedate on a kabuto, the samurai helmet

On a kabuto we can generally see ornaments of various kind, called tatemono (literally "standing things"). Among them, the maedate (front decoration) is probably the most common and it is difficult to imagine a samurai helmet without some kind of rich ornament on front. We can however find also kabuto with decoration on the sides (wakidate), on the back (ushirodate) and on top (kashiradate), such as the pheasant feather used by the Hosokawa clan for their samurai armor.

Origin of maedate is very old and we can see them already on samurai armor from the Heian period, where we find long and flat stylised horns (kuwagata) fixed above the kabuto's visor. Everything changed during the Sengoku jidai and maedate became smaller and simpler, to be used in battle.

Maedate can be fixed then with three kind of techniques:

Some of these tatemono were real sculptures, which denotes how aesthetic was important for samurai. An interesting analysis can be done on the materials of these sculptures: while it is certainly true that the most used material is wood, we can find also other peculiar natural elements, such as the whale's baleen, which are very light but resistant and very useful for large decorations that would break easily if made in wood. 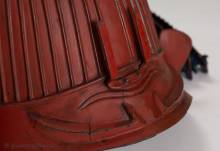 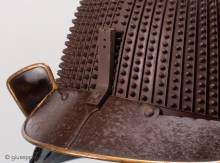 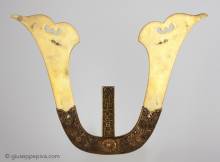 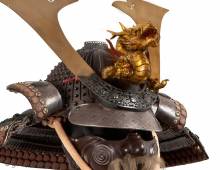