The high esteem accorded to calligraphy in Japan is demonstrated not only by a large number of works of art which include scripts and writings but also by the attention paid to the craftsmanship of tools used for this form of art.

While writing boxes (suzuri-bako, “inkstone box”) are designed for the practical function of housing writing implements, they are also often extraordinary examples of lacquer art. Inkstones were made a slightly abrasive stone, to facilitate the grinding of solid ink sticks (sumi) with water while preparing a liquid ink. The dissolved ink accumulates in the well of the inkstone, and the calligrapher can control the density of the ink by adjusting the amount of water used. Water amount can be controlled drop by drop using the suiteki, always included in the suzuribako. A small knife (kogatana or tōsu), and an ink stick holder (sumi-basami) can be also included in the writing-set.

While in China the “Four Treasures of the Study” (brush, ink stick, ink stone, and paper) were usually kept on the writing desk, writing boxes were developed and perfected in Japan. Many suzuribako are richly decorated with maki-e lacquer and have a decorative function besides storing calligraphy items. Wooden suzuribako were prepared in Japan since the 10th century, as seen in paintings from the Heian period (794–1185). 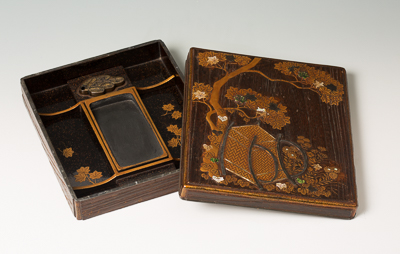 In the Kamakura period (1185–1333) suzuribako typically had two little trays placed on the two sides of the inkstone for brushes and other contents. Later, in the Muromachi period (1392–1573), several famous maki-e writing boxes were made, often decorated with a literary reference to Japanese classics. The poems were represented visually, but the composition often contained hidden cursive characters that should be read together with the pictorial elements. The decoration is composed to continue on the inside of the lid, inside of the box as well as on the sides. We can see a variety of inner configurations, with a single or double tray, or supporting panels, next to the inkstone. From the mid-sixteenth century, writing boxes and writing tables (bundai) were prepared in sets. Momoyama-period (1573–1615) writing boxes are recognized for their bold designs: a new style, characterized by asymmetrical compositions, often depicting autumn grasses executed in flat maki-e (hiramaki-e) is associated with the Kōdaiji Temple in Kyoto (Kōdaiji maki-e).

During the Edo period (1615–1868), several new box shapes and structures were created with a wide variety of decorative designs, including references to classical literature or patterns shared with other decorative art genres and kimono. New, distinctive styles were developed by Hon’ami Kōetsu (1558–1637), and later by Ogata Kōrin (1658–1716): this so-called “Rinpa” style remained popular through the end of the nineteenth century. Another peculiar artist was Ritsuo (Ogawa Haritsu, 1663–1747), the eccentric lacquer master, created writing boxes with unconventional decorations and techniques such as the inclusion of ceramic, metal, or carved red lacquer inlays.

During the Meiji period (1868–1912), along with the emergence of innovative writing box shapes and decorations reflecting modernist sensibilities, works drawing on historical styles and decorative schemes were revived and copies of famous boxes were prepared.