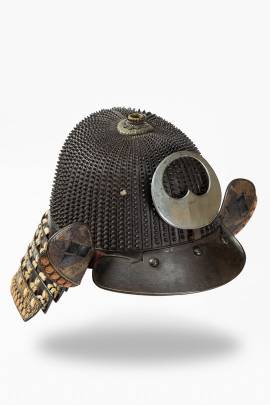 The helmet was the most difficult part of a samurai armor to make and was usually the work of a master armorer, who could eventually sign the piece.

Helmet bowls (bachi) are classified depending on how they were built. There are several kabuto types, but a high-rank samurai would often have on his armor a multi-plate kabuto (suji-bachi and koboshi) or a kawari kabuto, a helmet with a spectacular or unusual shape.

Regardless of their shape, almost all samurai helmets were fitted with a frontal decoration called maedate and a neck guard (shikoro), at the end of which there were two wing-like projections named fukigaeshi.

The samurai helmets for sale are listed above. Select a thumbnail to access description and image gallery.

Are you looking for Kabuto helmet?

As in any other martial symbology, in Japanese culture too the helmet (kabuto) represents the most important part of the Samurai, namely the warrior's head. In the painstaking process of crafting kabuto helmets, the Japanese art of armor-making reaches its pinnacle, as incredible care was taken to incorporate elaborate decorative elements, which alluded to specific character traits of each Samurai and reflected his personality as a warrior. The tradition of naturalistic references pervades every facet of life within Japanese culture, as a point of contact between reality and spirituality, with elements which may be related to a specific season (kigo) as their distinctive trait.

The seemingly enigmatic character of kabuto helmet decorations shouldn't therefore mislead, as it reveals a deep connection between the kabuto and its owner, for whom the helmet was specifically forged. As is the case with suits of armor, helmets too consist of a number of iron plates secured to one another by cords and rivets, and they often feature noticeable projections at the base of the head and at the level of the ears. These appendices, beyond serving the obvious defensive function of deflecting the katana's strikes, are also scenographic elements which help create a stylistic uniformity between kabuto and menpo (the Samurai's mask). Or, on the contrary, they may counterbalance each other in a typically Japanese fashion: a mask with especially elaborate and aggressive traits will be paired to a sober and minimalist kabuto helmet, in a search for that formal balance which is a major trait of Japanese aesthetics, and which also mirrors the inner balance of the samurai, one of his noblest virtues.

Various kinds of naturalistic elements are found in helmet decorations, including animal references (dōbutsu), which may be as obvious as an intimidating pair of horns, and plant references (sokubutsu). Kabuto helmet decorations may feature depictions of pine cones, pomegranates or other types of fruits and flowers, which will always correspond to precise symbolic attributes of the warrior for whom that particular kabuto was created.