“Circle paintings” (enso) are closely associated with the meditative experience of Japanese Zen monks, which express their individual state of mind through this graphic sign. The interpretations given to this pictorial act are countless: from an overall perspective the circle is seen as the emblem of Zen’s deepest concepts, icon of the meditative process toward the Enlightenment (satori); the enso represents also the conceptual opening toward the Infinite or the identification with the Emptiness (mu). In the case in which the circle is not perfectly closed, it reflects the Japanese aesthetic of “imperfect beauty”.

In the Tokugawa Japan, especially at the end of the 17th Century, the simplicity of the ink calligraphy became the main iconography of Zen doctrine’s teachings, used by the Japanese monks to spread the Buddhist concepts also to the lower layers of the population. In spite of this simplification of the art forms, calligraphy and painting remain a distinctive part in the ideal of literate-monks (bunjinso), which continued to apply the philosophical concepts in their works of art, referring to the Buddhist teachings through the use of small verses of difficult interpretation (koan).

This enso by Shogetsu is a 'mirror enso': a pure circle with no inscription, this is the ultimate in simplicity. The Zen master leaves the interpretation up to the viewer: basically, 'look into this mirror and see your true nature'.
Shougetsu was 418th abbot of Daitoku-ji and was highly regarded as a Zen master and master calligrapher. Shogetsu was also a tea connoisseur and potter and is well known for his tea ceremony retreat named Shogetsu-an. 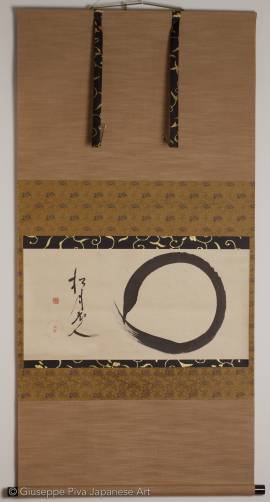 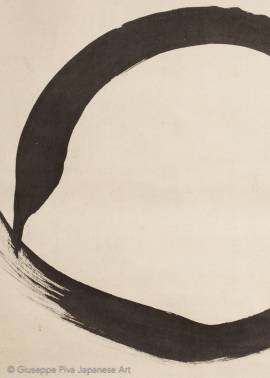 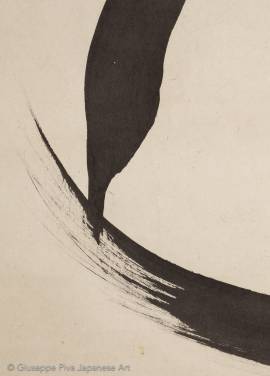 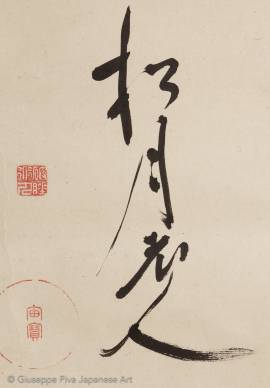 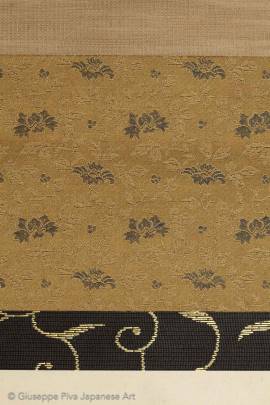