Folding screen with amusements in Kyoto

Folding screen with amusements during the four seasons

The screen depicts some games and amusements held during the year:

Starting from the right side, we see a group of girls playing hanetsuki, a game similar to badminton without a net, played with rectangular wooden paddle (hagoita) and a brightly colored shuttlecock made with soapberry seed and feathers; the game was already played by aristocrats during Muromachi period but became popular during the Edo period, especially among girls during New Year’s festivals.

The second scene is a private party during cherry blossom (hanami), the most popular amusement even at present time: participants are preparing tea ceremony, playing go, smoking, drinking and playing a shamisen among rich lacquerware.

A large group of people is performing the Bon festival dance (Bon odori), a group dance held at night during the season of Obon, the Buddhist festival for the dead in mid-August: dancers hold a fan and have their heads covered with tenugui, a traditional cloth.

The left side of the screen shows different autumn scenes, including a party writing poems in front of a beautiful maple tree, while another is enjoying music and sake on a boat under the same tree. On the background, deer are running under a full moon and a group of wild gooses, all traditional symbols of this season.

Screen for sale. Price on application. 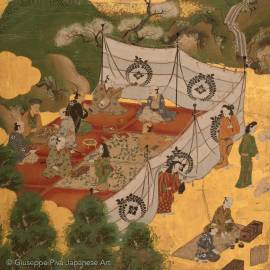 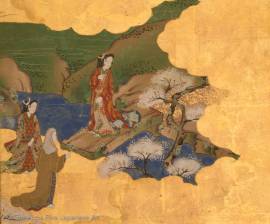 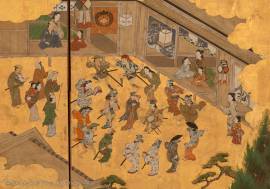 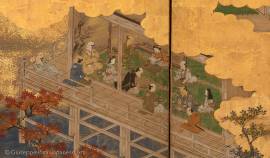 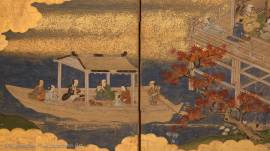 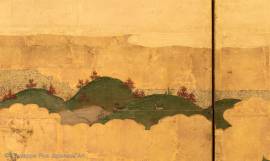