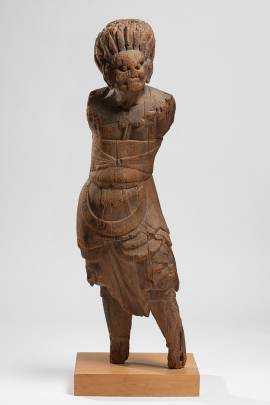 A wood standing figure of one of the a Heavenly Generals, 12th century 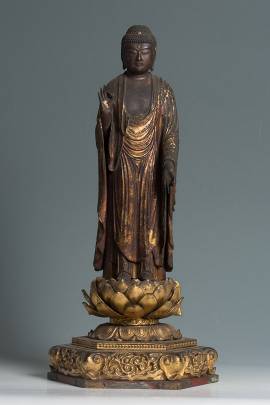 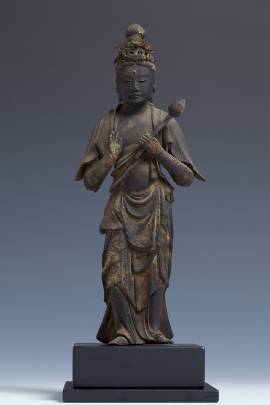 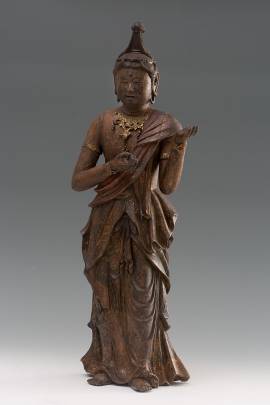 Images of the Buddha, who lived in India between the 6th and 5th centuries B.C., originated in North India and present-day Pakistan and Afghanistan in the 1st century A.D. Over the following centuries, sculptural representation of Buddha and the large pantheon of Buddhist deities became an important artistic tradition in nearly every culture between Afghanistan and Japan, where this religion arrived during the Nara period, mid 6th century.

Japanese buddhist sculptures range from miniature figures to giant images and are almost invariably  made of wood.

The Japanese sculptures for sale are listed above: click on the image to access the full description and the image gallery.


Are you looking for Japanese sculptures?

Japanese sculptures bear witness to the influence of Buddhism in the land of the Rising Sun. The balance and serenity typical of eastern philosophy are transfigured into works of the highest quality, intended mainly to serve as icons within temples and sanctuaries. Buddhism made its way into Japan thanks to a Korean delegation around the half of the 6th century, and since then the Buddhist religion has played a unifying role within Japanese society, which is notoriously fractured along class lines, as well as deeply dishomogeneous between coastal and inland areas. Leading Italian Orientalist Giuseppe Tucci went so far as to coin the term “Buddhist Humanism” to define the enormous impact which the religion originating in India had on Japanese culture.

Japanese sculptures are a direct testament to this profound connection starting from the Asuka period (8th century), when Japanese artists began to model, mostly from wood, the earliest Buddhist sacred sculptures. The styles and canons changed through the decades, but the underlying principles of formal balance remained virtually unchanged even as Japanese sculpture explored new expressive modes. Between the Muromachi and Edo periods (namely between the 16th and 17th centuries), Japanese sculpture experienced another crucial wave of innovation, as wooden sculptures began displaying a new-found mastery of folds and motion while preserving their distinctive compositional balance.

Around the same time, Japanese sculpture expanded its thematic range to include new subject matters outside of the realm of the sacred, applying the aesthetic of balance and formal perfection to sculptural works which weren't necessarily intended for sanctuaries. The subject matters of Japanese sculptures are often influenced by outside cultures, as in the case of dragons – a Chinese inheritance – or elephants, which became a fundamental theme in Japanese sculpture but were actually introduced to Japan through models from the Indian and Malay regions.

Japanese sculpture thus appears to have assimilated an artistic legacy that stretches beyond its national borders, tapping into the artistic heritage of the entire Orient and generating a unique synthesis which, today, is the authentic expression of Japanese sculpture.