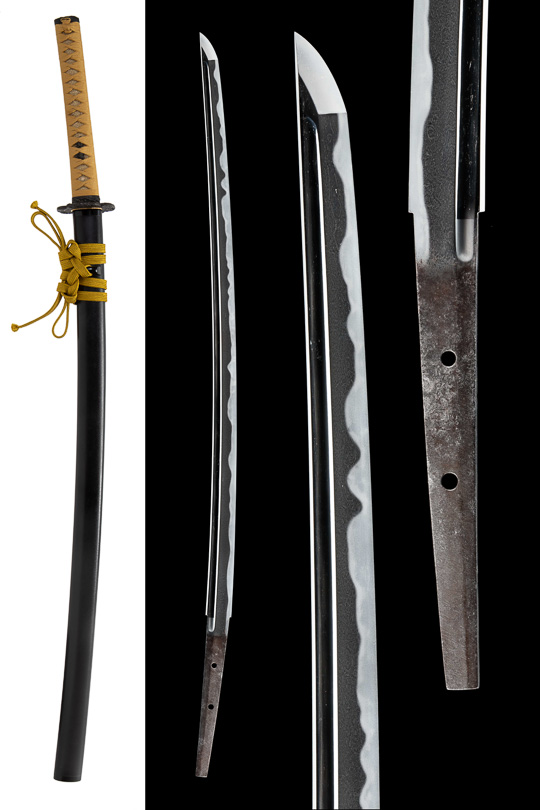 Kitae [forging pattern]
Itame mixed to mokume that tends to nagare near the ha, with ji-nie

Naoe-Shizu
Appointed as Juyo Token
Shortened and unsigned, the period is around Joji [1362]
Blade length: 69.7cm
Written by Hon’ami Nisshū, Living National Treasure, on a lucky day in July of 1994, year of the dog, for Hashimoto sensei [+ monogram].
Hon’ami Nisshū [+ kao]

Koshirae [mount]
The sword is accompanied by a good koshirae with antique good fittings decorated with dragons.

Shizu Saburo Kaneuji is considered one of the great Japanese wordsmiths. He worked from the late Kamakura period to the early Nanbokucho and his works influenced the evolution of the nihontō.

Born in Nara, he begun working with Kanenaga, founder of the Tegai school, following the Yamato tradition until, maybe tired of its classicism, he went to study the Soshu style under the great Masamune in Kamakura. He then finally moved to Mino where he founded, along with Kinju Kaneshige, the last of the five great school (gokaden). The shapes of Shizu’s swords show a great variety, as he lived in a period of strong mutations and wanted to experiment different solutions.

The term Naoe-Shizu refer to Kaneuji’s students who, at the master’s death, moved from Shizu to Naoe, also located in Mino province. Their workmanship is similar to that of Kaneuji but often features a more prominent amount of sunagashi. Since they made long swords in the typical Nanbokucho style that have been cut down with signatures lost, there are no signed tachi left by the Naoe Shizu group and names such as Kanetsugu, Kanenobu, Kanetomo, and Kanetoshi are known through signed short blades.

This sword shows a tapering shape, following a late Kamakura period design rather than the wider Nanbokuchō period works. It has some rather spectacular forging with a very clear itame pattern and some whirlpools of mokume that make it a gorgeous work. The Soshu tradition is visible in the mix of hard and soft steels, as chikei have formed everywhere on the blade, making the forging pattern stand out. The hamon is also exceptional, featuring a lot of horizontal activities like sunagashi and kinsuji, as well as the togariba and gunome shapes typical of Shizu.

The NBTHK certificate makes a point of saying that it is “kenzen” (“perfectly healthy”), which is a very high degree of praise for health.

The blade was polished by Kenji Mishina, Mukansa polisher, and is very bright and clear in his typical style. 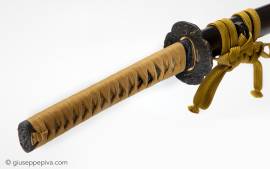 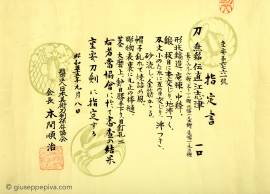 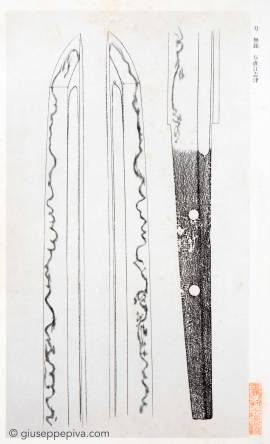