Signed: Sekka with round seal Seisei


A six-panel screen depicting stalks of blue, dark blue and white kikyo (Chinese bellflower) growing from behind bamboo fences, some leaves depicted with the tarashikomi technique. The bamboo fences and some flowers' details are in gold.

Painter and designer, Kamisaka Sekka has been one of the most important Japanese artist who brought the traditional aesthetic in the western world. Sekka came from a samurai family - his father was in service at the imperial palace in Kyoto - and studied art during a very delicate period of Japanese history: the transition between the old feudal system of the Edo period to the modern capitalistic one of the Meiji restoration. It has been a traumatic era for all Japanese people and it had relevant effects on artists and their works. In fact, they had to choose between “old” and “new”, between “traditional” and “international”. Sekka chooses the road of national traditions and committed himself in all the fields he could. Under the guidance of his teacher Kishi Kokei, he decided to follow the art of the Rinpa School, using plain and simple designs: toward the end of 16th century, a group of artists and craftsmen with exceptional skills founded an artistic language based on stylisation in order to reach an absolute and elegant simplicity. Sekka chose this way: he does not consider the new techniques coming from Europe and commit himself to traditional Japanese arts and crafts. The use of space is superb: compositions are often asymmetric but always balanced, with original perspectives and innovative views. The simplicity of his compositions and his geometric shapes allow certainly to consider Sekka as one of the pioneers of contemporary design.

Sekka excelled in the small size works in which the different subjects are represented in full size. His screens are rare and generally of regular size; this narrow and long shape is very unusual and fits very well his natural attitude of balancing empty spaces and full-size flowers. 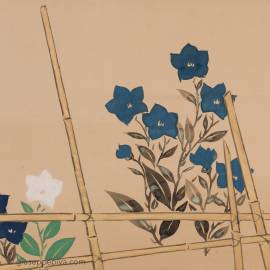