W. W. Winkworth, London and the Isle of Wight

The nyoi sceptre is carved as a reishi fungus on the stem, with a sub-tendril emerging near the head to form the cord hole. An inome (boar's eye), the inverted heart-shaped symbol of courage, is pierced towards the base. The fungus head is designed to recall some motifs often used by Kokusai: it is in fact possible to see a water dragon wrapping itself around the cap and the whole design recalls of a mokugyo and of a humanoid  caricature face at the same time.

The auspicious reishi fungus is an auspicious symbol long life. Known in China as the "mushroom of immortality” for over 2,000 years, in ancient times reishi was believed to confer longevity and hence referred to as the “divine fungus”. A symbol of enlightenment and mastery, this polypore mushroom is also strikingly beautiful.

Kokusai is considered a true genius of netsuke art; not only a netsukeshi, but also an actor, a comedian and an all-around entertainer. He lived and worked in Asakusa, an area of Tokyo, where he founded a carving school with a very distinctive style. The main feature of Kokusai and the Asakausa school is certainly the material used to produce netsuke, pipe cases and other items: stag antler. This material is extremely difficult to carve, as it is very hard and porous inside. It often reveals large dark areas that forces the artis to adapt his design. Kokusai and his pupils showed also a great originality of design, coupled with a keen sense of humour.

This netsuke is extremely interesting, as the inscription shows that after retiring (nyūdō) from his career as an entertainer, Kokusai signed using his full name instead of the usual “Koku” seal, showing his aristocratic  (Takeda Minamoto) descent. 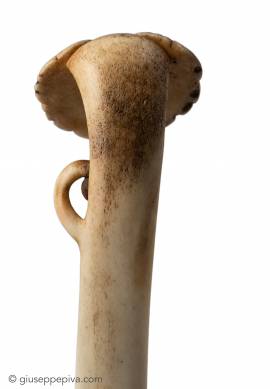