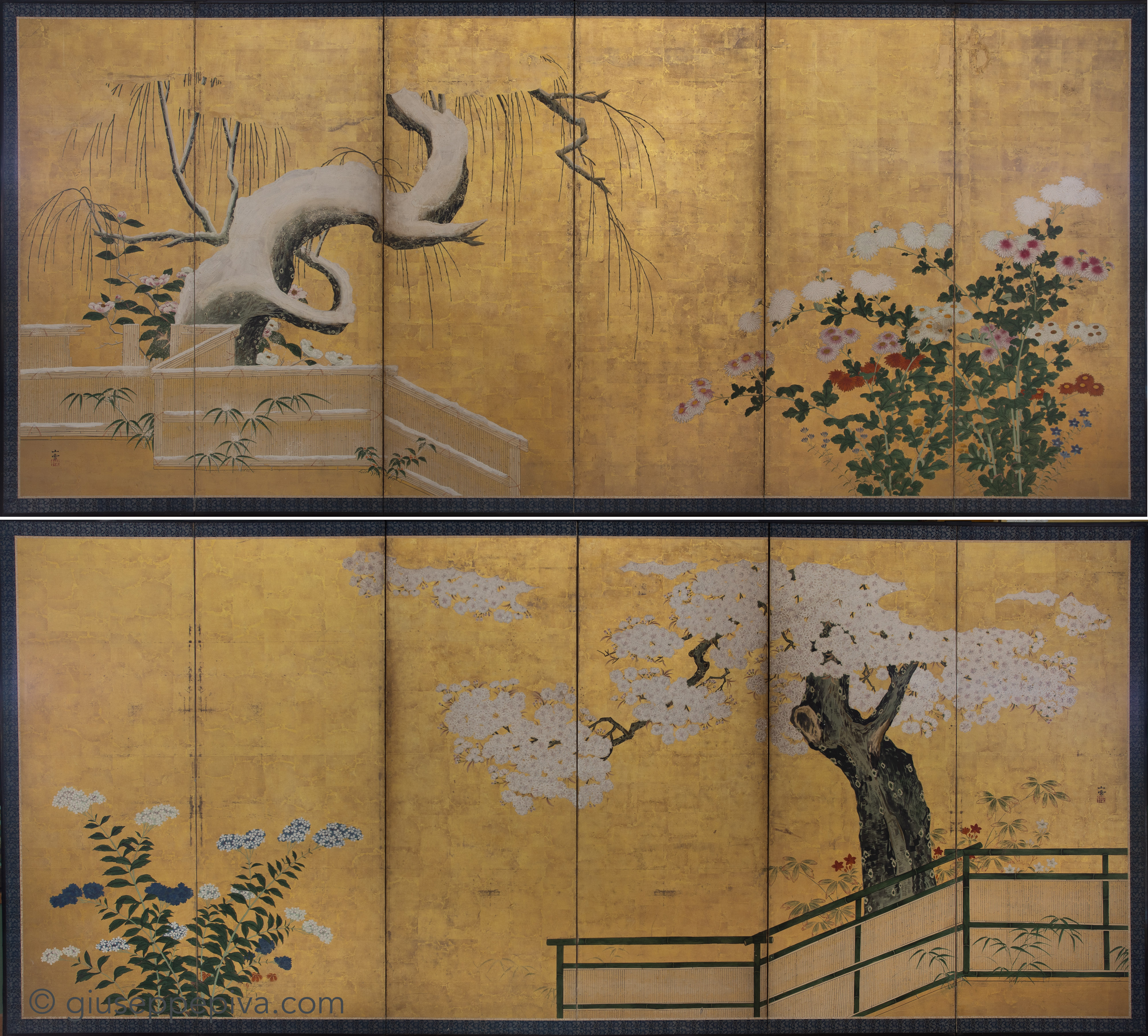 A gnarled cherry tree in full bloom and a snow-covered willow tree frame the composition of this pair of folding screens depicting flowers and trees in the four seasons. Red and white azaleas and low-growing bamboo grass (kumazasa) beneath the cherry tree complement the seasonal imagery of its pearly blossoms, while pink and white sasanquas and some sprays of marlberry (yabukōji) add touches of color under the wintry willow. Hydrangeas and pinks (nadeshiko) herald the arrival of summer in the fifth and sixth panels of the right screen, and in the first three panels of the left screen chrysanthemums, blue bellflowers (kikyō), patrinia (ominaeshi), and fragrant eupatorium (fujibakama) indicate the advent of autumn. The trees of spring and winter take the most prominent roles compositionally, but when viewed together the screens present an evenly paced passage through the four main divisions of the year.

Flowers and Trees of the Four Seasons belongs to a major lineage of Japanese painting, descending from late medieval folding screens that often, but not always, included assortments of birds. Painters of these antecedents characteristically deployed various birds and flowers, flowering trees and other plants at the moments of the year when they are most beautiful to show seasonal progression in the unified visual field of a pair of six-paneled screens. Simultaneous combinations of blossoming cherry trees and russet autumn maple leaves lend these works a paradisiacal and otherworldly aura, which could be further enhanced with the presence of exotic or auspicious birds such as peacocks or cranes.

Our present pair notably features only flora native to Japan, many of which were stock themes in Japanese waka poetry by the time they were painted in the 17th century. A low fence in the outer panels of both screens further domesticizes the work with its subtle suggestion of unseen human presence, making it seem as if we are peering into a garden. These unassuming barriers also present features that underscore the screens’ description of passing time: the fence in the right screen is newly prepared from fresh green bamboo (whose color fades to golden brown over time) and rushes, while that in the left screen is made solely from bundles of rushes or reeds. Gaps in the fence in the left screen show its wear and tear and add an element of rusticity.

Both screens display the painter’s expert command of his craft in constructing pictures. To begin with, the cherry blossoms were not simply painted but built up with a white shell paste (gofun), which makes them emerge from the painting surface in low relief. The same technique was used for the white chrysanthemum blossoms in the left screen. Sheathed in countless squares of gold leaf on every panel, the screens display minimal pictorial depth, except where the shallow bends in the two fences and gold clouds descend over the tops of the cherry and willow trees. This abstracted treatment of pictorial space, in which an even application of reflective gold leaf dispenses with the need for it, is a feature of screen paintings in early modern Japan that would find its ultimate expression in the works of Rimpa artists such as Tawaraya Sōtatsu (d. ca. 1640) and Ogata Kōrin (1658-1716). The built-up forms of the petals, strong ink outlines, and descriptive texture strokes on the cherry tree, and the serpentine form of the willow are technical and stylistic features that show the present work to be a product of the Kano school, probably one active in Kyoto around the middle of the 17th century.

The bundled rush fence, for example, is a motif that appears prominently in panel paintings that Kano Sansetsu (1590-1651), whose seals and signatures appear on the lower outer corners of our pair, produced for Tenkyūin, a subtemple of the monastery Myōshinji, in 1631. Sansetsu was the second-generation leader of the Kyoto-based Kano school, which remained in the old capital after his cousin Tan’yū (1602-1674) transferred the main Kano workshops to Edo, the shogun’s capital. Known equally for his scholarly interests—he drafted parts of the first history of Japanese painting, which his son Einō would publish as Honchō gashi in the late 1600s—and his idiosyncratic painting style, Sansetsu led an active workshop that produced scrolls, folding screens, and sliding panel paintings for major temples and members of the court aristocracy. Because the cherry tree and willow lack the rounded sculptural forms and display none of the insistent angularity of Sansetsu’s trees, it is difficult to make a positive attribution of the present work to this artist. The “Sansetsu” signature and the seal, read “Jasokuken,” appear in identical combination on surviving works by the artist, however, which could lead us to conjecture that the screens were painted by an assistant and were appended with the master painter’s name upon completion.

Pair of screens for sale. Price on application. 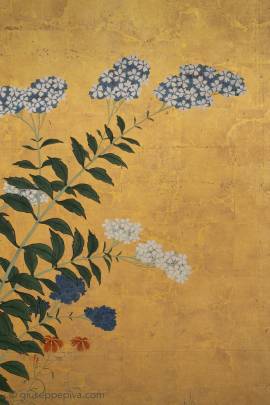 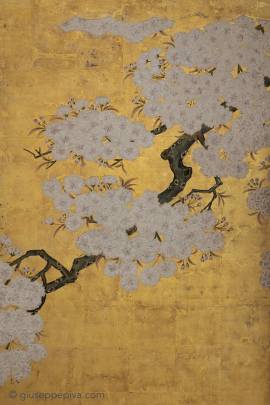 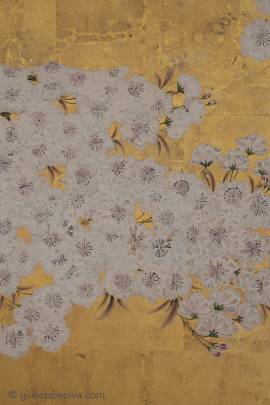 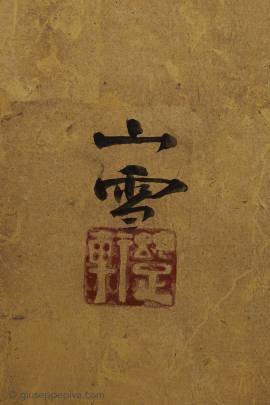 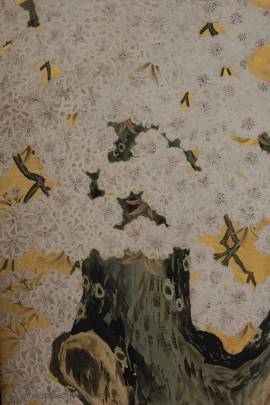 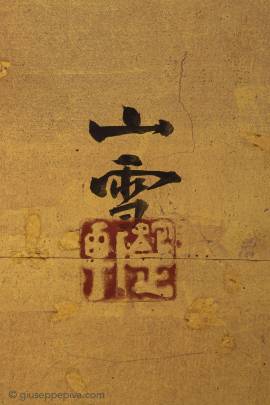 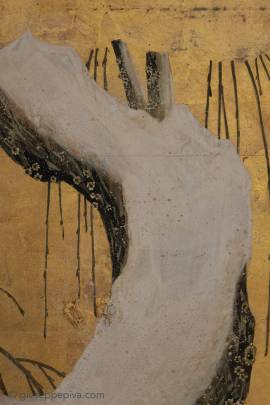 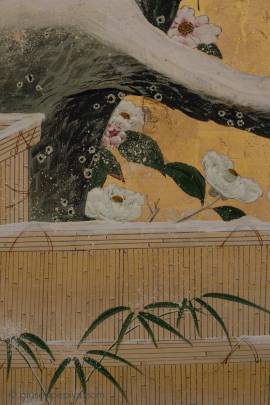 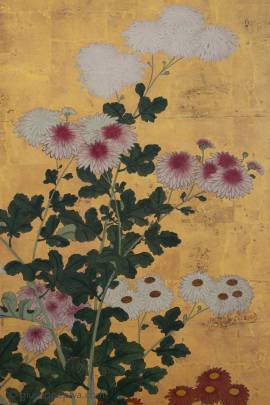