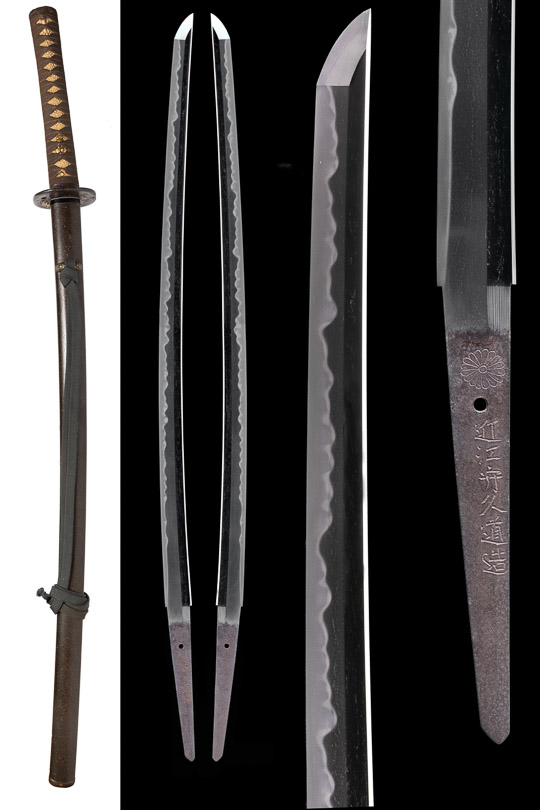 Origami [paper]: The blade comes with a Hozon Tōken (Sword Worth of Preserving) certificate issued by the Nihon Bijutsu Token Hozon Kyokai in 1965 (15th session).

Koshirae [mounts]: The sword is accompanied by a good antique uchigatana koshirae with high level fittings.

Kyō Go Kaji, an abbreviation for “Kyōto Go Kaji”, refers to the 5 swordsmiths of Kyōto. The term was used to describe a group of related forgers who worked prosperously in the Kyōto area during the Shintō period. These swordsmiths produced excellent works with similar characteristics and each one of them had many students for several generations. Nagayama Kokan in 1990, Fukunaga Suiken in 1985, Tokunou Kazuo in 1977, Albert Yamanaka in 1971, and Yoshio Fujishiro in 1947 all identified the same forgers as Kyō Go Kaji: Iga no Kami Kinmichi, Echigo no Kami Kinmichi, Tanba no Kami Yoshimichi, Etchū no Kami Masatoshi and Ōmi no Kami Hisamichi. The first four were sons of Kanemichi, the founder of the Mishina school, while Hisamichi was a student of Kanemichi's eldest son, Iga no Kami Kinmichi.

Hisamichi shodai (“first generation”) was born in 1626 and was student of Iga no Kami Kinmichi, who gave him the name Mishina Hisamichi and whose style he adopted. Active between 1665 and 1703, the general characteristics of his blades, including the present one, are in fact typical of the Mishina school: a strong and powerful shape with shallow sori, wide mihaba and large chu-kissaki; ko-itame mixed with masame, with masame in shinoji-ji, Kyo-yakidashi and a very skillfully done hamon with Mishina boshi, which is a shallow notare-sugu with pointed ko-maru and a medium turn-back. Hisamichi often used the kiku mon before his signature. His swords are rated Ryo-Wazamono for their sharpness. He died in 1711 at the age of 85. 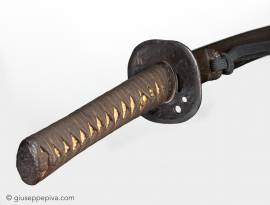 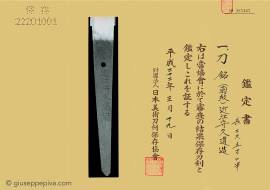