Six-panel screen with birds and river

The fine traditional composition shows very well defined birds and chrysanthemums with other flowers on a river, while the sky is left unpainted in plain paper, sprinkled with gold and silver flakes to render the clouds.

Pupil of Maruyama Okyo (1733-95), Hara Zaichu is one of the prominent Kyoto artists of his age. He was also influenced by the Tosa school as well as by later Chinese paintings, as clearly visible in the present work, which offers a classical Chinese composition with the details requested by the aristocratic customers. Zaichu created a personal strong style and formed his own school in Kyoto, called “Hara”, in the 1770s. With his pupils he also contributed to the decoration of the Kyoto Imperial Palace when that was rebuilt in 1790. In fact, most of his works had been commissioned by the imperial family and also the present screen must have been decorating some palace of a nobleman, as testified by the chrysanthemum crest on the kanagu.

In addition to those on display in the Kyoto Imperial Palace, paintings by ZaichÅ« can be seen at the Kyoto National Museum, Shizuoka Museum, Iida City Museum, Daitokuji Temple, Ikkyā«ji Temple, and Shokokuji Temple. Outside Japan, the British Museum holds one of his paintings. 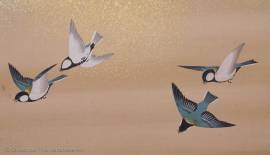 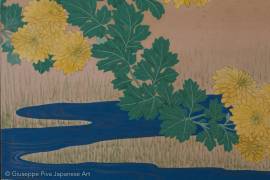 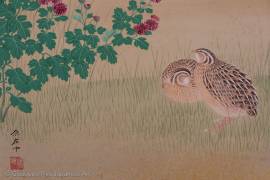 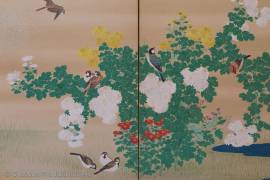 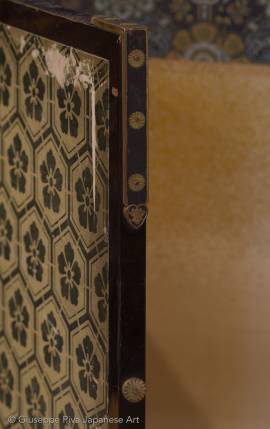