A field of wild pinks (nadeshiko; Dianthus superbus) blooms under a rising moon in this six-panel folding screen. The anonymous artist arranged the flowers, a relative of the carnation, in dense, rhythmical clusters in three horizontal registers in the lower half of the screen, above which clouds of gold leaf merge with the gilded sky. Interspersed between the layers of flowers are passages where flecks of silver foil, now tarnished with age, represent the ground bathed in the soft moonlight. Tiny pine trees on the green hillside from which the moon emerges add a dramatic element of spatial distance to this work.
Autumn flowers such as pinks, bush clover, and Eulalia were celebrated in poetry and painting from the nascence of these cultural forms in Japan. Pinks, also called tokonatsu, appear in poems from as early as the 8th-century Man’yōshū anthology of poetry, and extant paintings, such as the Illustrated Scrolls of the Tale of Genji, prominently feature such autumn flora. Both extant folding screen paintings from the Muromachi period (1336-1573) and depictions of them in narrative handscrolls feature combinations of autumn flowers and the moon, itself a motif with specifically autumnal poetic associations. By the time the present work was completed, autumn flora and the moon were firmly established motifs in the repertoire of yamato-e folding screen and mural paintings depicting native subject matter. Extant screen paintings representing wild pinks as a single subject date only from the Edo period in the mid- to late seventeenth century. The present work, with its combination of wild pinks and the hills partially concealing a rising moon in the background, maybe the earliest work among the known screen paintings of this subject.
While it is difficult to establish a date or attribution for the present work, several features and similarities to other extant screen paintings allow us to place the production of Field of Pinks to the early 17th century. Varieties of autumn flowers appear regularly on folding screens from late medieval and early modern Japan, but representations of pinks as a single motif on folding screens are relatively uncommon. A comparable example in the Idemitsu Museum of Arts, for example, pairs pinks in one screen with poppies in the other. A related work in the Museum of Fine Arts, Boston, depicts only poppies and is associated on stylistic grounds with the painter Tawaraya Sōtatsu (d. ca. 1641). Barley Field (Burke Collection, Minneapolis Institute of Art), a single screen painting dated to the early 17th century, depicts ripened grain and also incorporates sprinkled flecks of silver foil for the ground. In contrast to each of these other works, in which the uniform floral motifs are painted directly over an evenly sheathed surface of the gold leaf, the present work features round-edged gold clouds that are layered between the banks of flowers and between the flowers and the distant mountain. The arrangement of gold clouds contributes to a subtle modulation of pictorial space found in earlier works but not present in the Idemitsu, Boston, and Minneapolis paintings. The greater concern with pictorial space in Field of Pinks points to an earlier phase of Yamato-e screen paintings.
The evolution of screen paintings that depict flowers or plants as the central motif, such as the so-called “Musashino screens” is not well understood. Judging from the evolution of the theme of iris flowers on such well-known examples as the Iris Screens by Ogata Kōrin (1658-1716) in the collections of the Nezu and Metropolitan museums, however, such floral compositions may have originated as narrative paintings with human figures, or as an illustration of a poem, and then evolved as decorative, single-motif floral compositions. Musashino screens depicting a field of autumn grasses and flowers concealing a full moon at the foot of the majestic Mount Fuji are assumed to be an illustration of a poem, or a decorative variation of Chapter 12 of the Tales of Ise (Ise Monogatari), a tenth-century novella. Like other floral subjects in Japanese art wild pinks suggest multiple levels of signification. A pair of poems in the chapter of the Tale of Genji named for the flower, “Tokonatsu,” pivots on the wild pink as a metaphor for feminine beauty, an association that continues to the present day. A poem in the Kokinshū anthology of poetry (ca. 905) plays on the homophonous associations of the flower, in which “toko” can be a pun for “bed”:
Not even dust
May touch them, I feel,
Since they’ve bloomed,
Where my love and I bed down
On pink coverlets of flowers.
(trans. Thomas McAuley)
Wild pinks thus allude to human relations not immediately apparent in the present screen’s blossoming field. This flexibility of meaning is particularly well suited to the function of screen paintings as decorative objects to be displayed on particular occasions appropriate to the season and attests to their enduring powers of expression.
Matthew McKelway Professor of Japanese Art History, Columbia University
Miyeko Murase Professor Emerita, Japanese Art History, Columbia University

Screen for sale. Price on application. 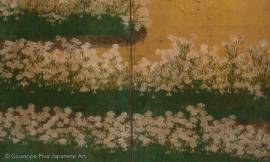 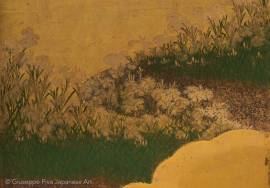