A small folding screen with a deer in autumn grasses

Depicted beside over-scaled autumn grasses, the screen depicts a male deer running toward a grassy hill, while the empty sky is filled with old, elegant kana script, forming a poem by Koga Michiteru (Minamoto no Michiteru, 1187-1248), commander of the Left Gate Guards at the Imperial Palace. The verses are dynamically brushed across the surface in a manner known as "scattered writing" (chirashi-gaki). The rhythm and intensity of ink allow the fluid characters to harmonize with the rhythm of the design, following the direction, from right to left, of the wind and of the running deer.

the deer knows he must leave the fields

for the mountains, sent on his way by the breeze

Motifs of autumn grasses and deer have been paired in Japanese poetry and design since the Heian period. Evocative scenes with this subject can be found on lacquerware and painting.

Due to its small size, this screen can be classified as koshi byōbu (litterally, “waist screen”), a kind of screen which were set up behind a seated guest to ensure that no one was lurking behind them.

The screen seems related to a pair of small byōbu attributed to Hasegawa Tōgaku, with a very similar composition but with a different poem and two deers instead of one. 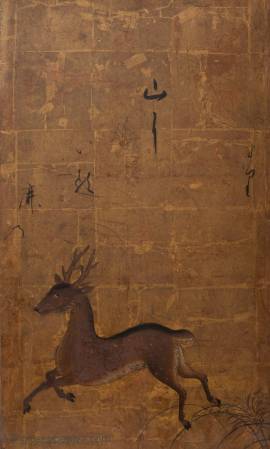 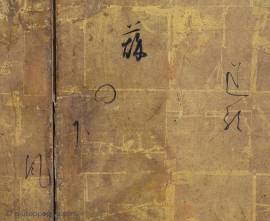 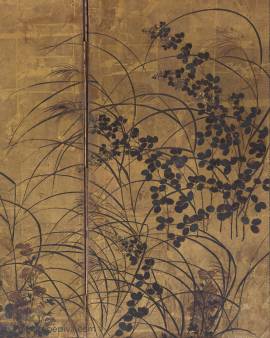 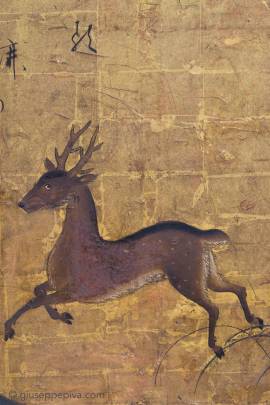