A pair of two-panel folding screen

Formerly a six-panel screen, this realistic landscape is a typical painting of Unkoku Tōgan. Mountain cliffs, large rocks, boats, and houses are skillfully arranged around the central element of a vast range of water in the systematic composition and gentle and peaceful scenery. Shirai Kayo may well have been referring to this composition when he wrote of "an excellent landscape painting and well-ordered arrangement" in his art criticism work, Gajo Yoryaku.
Unkoku Tōgan was a suiboku-ga (“water-ink painting”) artist, one of the representative painters of the art world in the latter half of the Momoyama period. He worked in the manner of the 15th-century artist Sesshū at a time when the orthodox style of the Kanō school dominated painting. Initially a student under a Kanō artist (probably Shōei), he became familiar with the style of Sesshū while he was in the service of Mōri Terumoto in Suō province (now Yamaguchi Prefecture). The Mōri family owned the most famous of Sesshū’s works: a 17-meter long landscape painting from 1486. He copied this scroll painting, modeled his own style after it, and used it to back his claim in the famous legal contest with Hasegawa Tōhaku over succession to the line of Sesshū. The case was won by Tōgan, who gained the right to call himself the “fifth generation of Sesshū.” One of his Sesshū-style paintings, “Chinese Landscapes,” is an ink landscape closely resembling the original Sesshū scroll, but it lacks the bold lines of the Sesshū landscape and has, instead, more variations in tones, creating a greater sense of atmospheric depth. He later entered into the priesthood and reconstructed, on orders from his master, the Unkoku-an Temple, where Buddhist priest-artist Sesshu had originally lived.
A screen painting of Mount Yoshino, famous for its cherry blossoms, and “The Deer” are among Tōgan’s well-known works. Most of his work is in the Daitoku Temple in Kyōto. 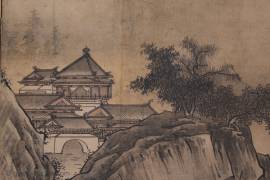 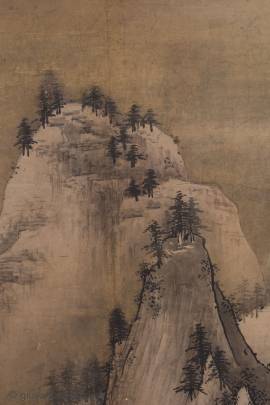 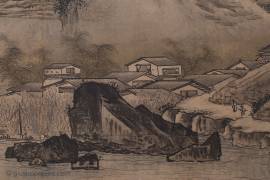 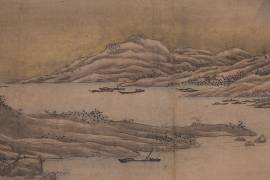 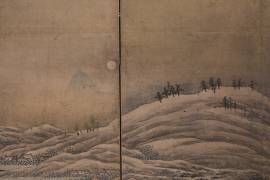 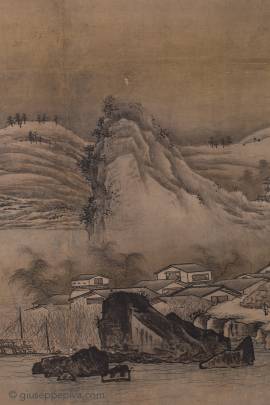 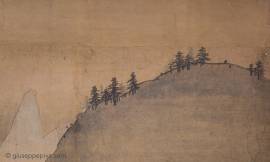