Samurai Armor in the style of Kuroda clan

Samurai Armor in the style of Kuroda clan

This magnificent suit of amor bears a kamon (family crest) representing a Chinese character. Even if it has not been possible to find the exact clan where the armor came from, a stylistic analysis  suggests a strong connection with the Kuroda family, whose suits of armor have many features in common with the present one.

The taste for large wakidate (side ornaments of the helmet) is the most evident feature. Even if the most famous Kuroda suits of armor bear giant horns on a momonari kabuto, portraits of this clan’s family members show other giants wakidate shaped as shells, ears, leaves, etc.

A very interesting and rare feature that we can find almost only on Kuroda armors is the peculiar double fukigaeshi on the kabuto’s side, made in kozane plates over an egawa (printed leather) background. Also the cuirass is typical: dō made with horizontal plates  laced partly with vertical strings (kebiki odoshi) and partly with individual knots can be often found on Kuroda samurai armor. As in this case, they are almost always decorated with black tatataki (raised lacquer). Finally, the use of a simple hanbō as mask, is another common Kuroda feature.

The helmet is a 32-plates za-boshi kabuto of very good quality, signed by Haruta Tokimune, an armorer from the Haruta group of makers of samurai armor.  The iron bowl is fitted with two large giltwood wakidate which join to form a circle over the head and a maedate shaped as a gorintō, a five-ringed Buddhist pagoda. The five plates neck protection (shikoro) is made in yahazu gashira iyo-zane, flat plates shaped as arrow-feathers. The same plates are used for all the other armor’s parts, except the haidate (thigh guard) of iyo type.

A noteworthy feature is the presence of large kohire attached to the dō that could protect the shoulders even if the sode were not worn.

The gold leather used for the inside of the cuirass is a clear sign that the armor certainly belonged to a high-rank samurai. 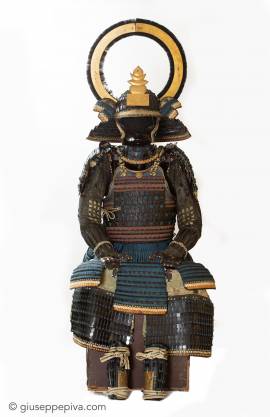 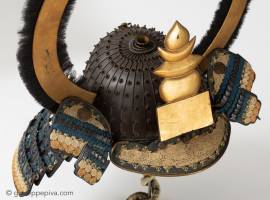 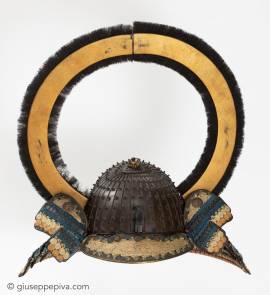 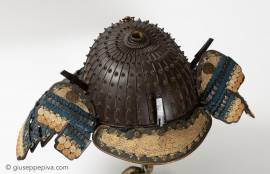 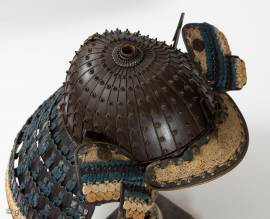 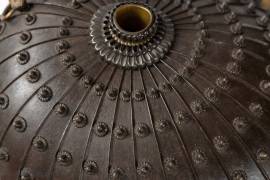 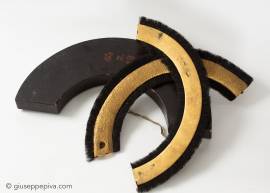 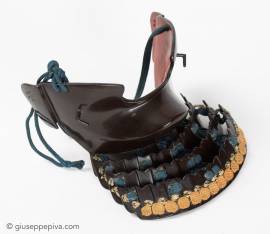 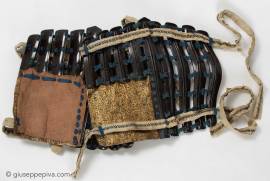 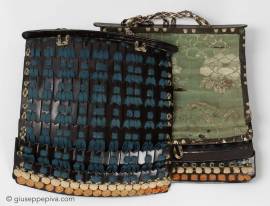 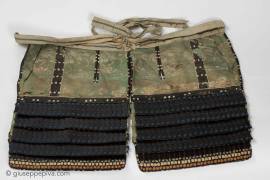 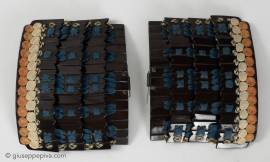 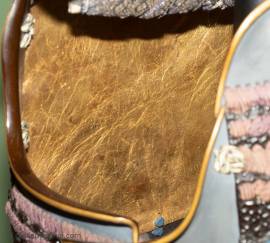