Inscribed on both sides and on the back:

There are two generations of Yokoyama Sukekane, both working in Bizen province in a revival style of old Bizen swords, as all the other sword-smiths of the Yokoyama school.
The long inscription on the nakago indicates this tanto was a gift made by Mr. Akio of Osaka, an important member of the NBTHK at that time, to his newborn grandchild named Toshio.
Gassan Sadakazu (1836-1918) is one of the two only sword-smiths, along with Miyamoto Kanenori of the Yokoyama school, appointed in 1906 as “Member of the Imperial Art and Craft”, a title that later will develop in “Living National Treasure”. He has also been an excellent horimono carver.
Satō Kanzan (1907-1978) was regarded as one of Japan's foremost experts on the Japanese sword. He was Executive Director of the Society for the Preservation of Japanese Art Swords (NBTHK) and Vice-Director of the Sword Museum. 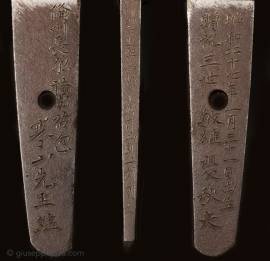