A six-panel folding screen with chrysanthemums and daisies

The screen shows Chrysanthemums and daisies of various sizes close to a fence. The composition is executed with a rich green foliage over a gold background and the only external element is the plain fence, designed in pale gold.
The leaves are colored using the tarashikomi, a classic Rinpa technique in which pale black ink or a color is brushed onto an area of a painting and then either darker ink, or the same or a contrasting color, is dropped into the first before it has completely dried, creating an effect of pooled colors with softly blurred edges.
The flowers are realistically rendered in three dimensions. This technique, one kind of moriage, entails the use of silver paint over a thick build-up of impasto-like white pigment made of ground oyster shells (gofun).
The term Rimpa (or Rinpa) derives from the combination of the last syllable of Kōrin’s name and the world ha (converted into pa), which means “school”. It was used to describe a highly sophisticated decorative style initiated by the painter Tawaraya Sōtatsu in the early seventeenth century and was continued by the Kōrin brothers in the next century. It is characterised by a use of defined outlines and striking combinations of colours and had a notable influence on painting on silk, screens, fans, ceramics, lacquer and ritual objects. 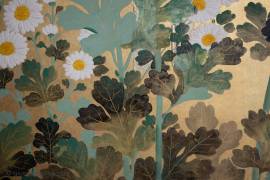 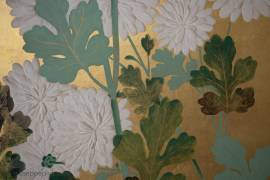 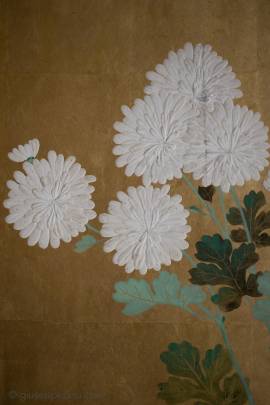